Posted on November 7, 2012 by mbwilsonart

The Kickstarter project is halfway through – 12 days to go – and we are almost there.  But still so far away.  $ 600 left to raise. The quest goes on.

Here is a behind the scenes look at the making of a kickstarter video, shot and assembled by Lawrence Ampadu, my assistant:

The WMAA Open Studios went very well.  We gave out a couple hundred postcards, with a link to “91 Paintings in 91Days”.  I met folks who had bought paintings and sculpture from me years ago, and who I had either never known, as the sales went through a gallery, or that I’d forgotten. That was fun.

What I realized halfway through Sunday afternoon was how many people smiled when they saw the Don Quixote work. 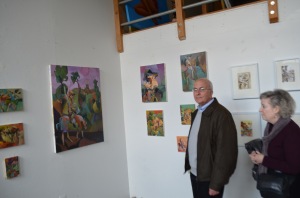 This entry was posted in Paintings. Bookmark the permalink.